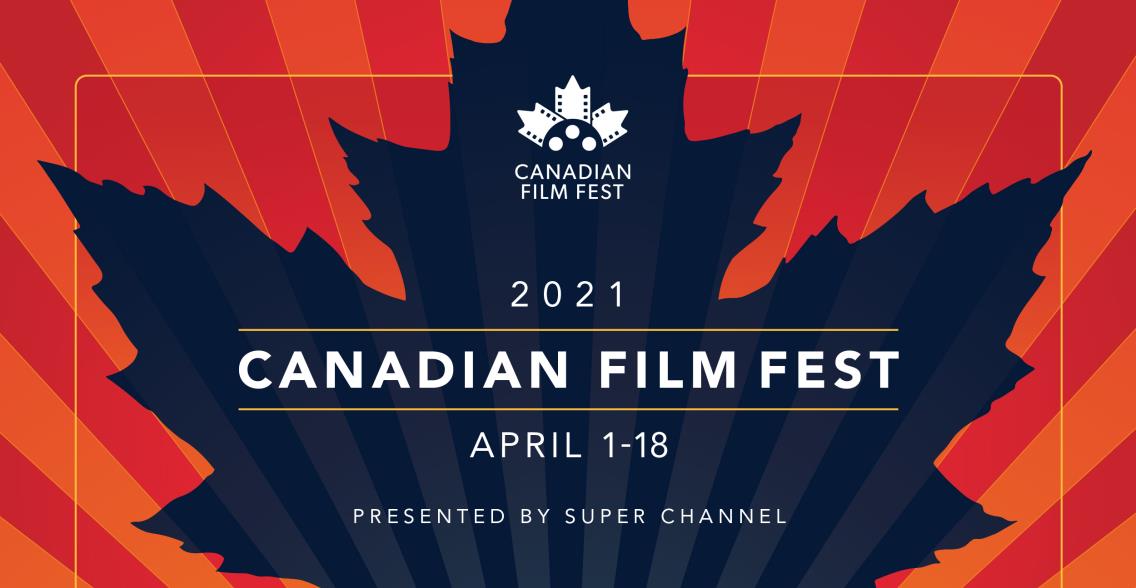 Beginning Thursday, April 1 and running for three consecutive weekends, nine feature films will premiere on Super Channel Fuse on Thursdays, Fridays, and Saturdays at 9 p.m. ET/PT. All festival feature films will have a linear only limited run, so viewers are encouraged to catch them while they can and experience them festival-style during their linear broadcast. In addition, 30 short films from the CFF will be interspersed into the schedule around the feature film presentations for viewers to enjoy as part of the film festival experience.

The Canadian Film Fest presented by Super Channel will immerse viewers in a virtual festival experience complete with pre-recorded and live Q&As with filmmakers, access to industry programs online (panel discussions, masterclass) and a virtual awards presentation. Further details to be announced.

“We are thrilled to be partnering with the team at CFF once again to bring another selection of exceptional Canadian films to our viewers through a virtual film festival experience”, said Don McDonald, President and CEO, Super Channel. “We couldn’t have been happier with our collaboration the first time around, and we are sure film fans are going to be excited to see what the 2021 edition has in store for them.”

“Super Channel has been an incredible partner and a welcoming virtual home for CFF, and we are pleased to partner again as we present our second virtual Festival to a Canada-wide audience. We've always been proud to present a wide range of fresh voices in our films each year as we showcase the inspiring talent, filmmakers, and storytellers we have in this country and feel this year is no exception as we celebrate the 15th anniversary of the Festival this year," said Bern Euler, Executive Director, Canadian Film Fest.

"As we come into the 15th anniversary of the Festival, I'm excited to share this programming across Canada together with Super Channel. With such a strong selection of captivating Canadian stories to present this year, including seven World Premieres and four Canadian Premieres, we have plenty of Canada to celebrate,” said Ashleigh Rains, Festival Director, Canadian Film Fest.

The CFF is proud to present a wide variety of films from both female (44%) and BIPOC (41%) directors included in this year’s slate of features and shorts.

The Canadian Film Fest presented by Super Channel will kick off on April 1 with the Toronto premiere of Sugar Daddy (dir. Wendy Morgan), starring Kelly McCormack (Letterkenny, A Simple Favour) and Colm Feore (The Umbrella Academy, Sensitive Skin, The Borgias), which follows a young talented musician who signs up to a paid dating website which takes her down a dark path – and her music along with it. Closing out the festival on April 17, will be Range Roads (dir. Kyle Thomas) making its Canadian premiere. Starring Alana Hawley-Purvis (The Great Fear) and Joe Perry (Everfall, Blood Mountain), this poignant film is an intimate story of grief, longing, and forgiveness, that explores the painful and beautiful complexities of what it means to be a family.

Other feature film highlights include the Toronto Premieres of White Elephant (dir. Andrew Chung), in 1990s Scarborough a teenaged girl is torn between a crush and her friends, and her quest for love becomes a question of self-love; Chained (dir. Titus Heckel), a crime thriller where a young boy’s discovery of a criminal imprisoned in an abandoned warehouse puts both their lives in danger; Between Waves (dir. Virginia Abramovich), a sci-fi tale of a woman straddling a fine line between enlightenment and madness when her presumed-dead quantum physicist lover pleads for her to join him in a parallel plane; The Corruption of Divine Providence (dir. Jeremy Torrie), which focuses on the mysterious disappearance and reappearance of a teenaged Métis girl in a small northern town; Events Transpiring Before, During, and After a High School Basketball Game (dir. Ted Stenson), a comedy set in 1999 centred on a boys basketball team preparing for the most low-stakes game of their lives; and of documentary The Last Villains, Mad Dog & The Butcher (dir. Thomas Rinfret), the larger-than-life story of the legendary Vachon family of pro wrestlers. The Festival presents the Canadian Premiere of Woman in Car (dir. Vanya Rose), starring Hélène Joy (Murdoch Mysteries, Durham County) as a woman who struggles to keep her secrets hidden, in a story that explores issues of class, family, desire, and deception. A complete listing of scheduled festival features follows below.

The 30 new CFF short films which will be showcased in the festival include the World Premieres of The Kall (dir. Barbara Mamabolo), which tells the story of an anxious young woman who searches for answers when the dead come knocking on her door; The First Goodbye (dir. Ali Mashayekhi), a sci-fi story of a widow’s obsession that transcends time and space; Sister Sekhmet (dir. Isa Benn-Moja), a documentary about a young woman struggling to find inner peace during the COVID pandemic; The World to Come (dir. Josh Fagen), focused on a family who must come to terms with a recent loss in the face of a strange apparition; comedy Breakout (dir. Kevin Hartford), about a young woman perpetually on the verge of breaking into song and dance who meets her new roommates for the first time; and With Feeling (dir. Gillian McKercher), about the reunion of an estranged couple trapped by unexpected weather. Other shorts include the Canadian Premieres of 1978 (dir. Hamza Bangash), following a rockstar from Pakistan’s Christian community who is offered the chance to reinvent himself as a State-sanctioned singer; and documentary Of Memory and Debris (dir. Rodrigo Michelangeli), an intimate portrait of the director’s grandparents, who remained in Venezuela after the majority of their families fled from the political and economic crisis.

The 2021 Canadian Film Fest presented by Super Channel features schedule:
(All feature presentations get underway at 9 p.m. ET and are preceded by a brief introduction and short film)

Thursday, April 1: Sugar Daddy(Drama) – Toronto premiere
Director: Wendy Morgan
Cast: Kelly McCormack, Colm Feore, Amanda Brugel, Ishan Davé, Nicholas Campbell, Kaniehtiio Horn, Aaron Ashmore, Noam Jenkins
Darren is a wickedly talented and unconventional young musician who dreams of making music like nobody has ever heard before. But she’s broke, juggling multiple part-time jobs, and has no time to create. Desperate for cash, she signs up to a sugar daddy paid-dating website and throws herself down a dark rabbit hole that forces her to grow up fast, shaping her music, and how she sees the world.

Saturday, April 3: Woman in Car (Drama) – Canadian premiere
Director: Vanya Rose
Cast: Hélène Joy, Liane Balaban, Gabrielle Lazure, Aidan Ritchie, Anthony Lemke
Anne seems to have it all – sophistication, a house on the hill, an upcoming wedding to the ideal man. But when her stepson returns home with a beautiful woman, Anne develops an obsession with the stranger whom she fears could destroy the privileged life she has built. In a story about a woman who struggles to keep her secrets hidden, Vanya Rose explores issues of class, family, desire and deception. As the countdown to her wedding day winds down, Anne drives head-on into redemption from a life of lies.

Friday, April 9: Between Waves (Drama, Sci-Fi) – Toronto premiere
Director: Virginia Abramovich
Cast: Fiona Graham, Luke Robinson, Miguel Damiao, Stacey Bernstein, Sebastian Deery
Even after his presumed death, Jamie continues to be visited by her lover Isaac, a quantum physicist, who pleads for her to join him in a parallel plane. Jamie follows a map and notebook Isaac’s left behind and embarks on a journey to the island of São Miguel in the Azores. At the centre of the Atlantic Ocean, Jamie begins to untangle the truth of what really happened the night Isaac disappeared, learning that she had a greater part in it than she cares to remember. Straddling a fine line between enlightenment and madness, how far will Jamie go before she’s in too deep?

Thursday, April 15: The Corruption of Divine Providence (Drama) – Toronto premiere
Director: Jeremy Torrie
Cast: Ali Skovbye, Elyse Levesque, David La Haye, Corey Sevier, Tantoo Cardinal
This is the story of a sixteen-year-old Métis girl Jeanne. She resides in a small northern town, and one day she mysteriously disappears. When she is found, she is near death and has developed what appears to be stigmata, the wounds that echo those carried by Jesus Christ in his dying moments.

Friday, April 16: Events Transpiring Before, During and After a Highschool Basketball Game (Comedy) – Toronto premiere
Director: Ted Stenson
Cast: Andrew Phung, Benjamin Arthurs, Paul Cowling, Isra Abdelrahim
It’s 1999 and the Middleview Ducks boys’ basketball team are about to play the most low-stakes game of their lives. As the team prepares for another certain loss, the dramas around the game become more of a focus than the score. Locker room conversations about existentialism, an assistant coach’s obsession with an NBA offence technique, organizing a radical theatre protest, and frantically searching for an osteoporosis- stricken canine are just some of the events that take place before, during, and after the high school basketball game.

Saturday, April 17: Range Roads (Drama) – Canadian Premiere
Director: Kyle Thomas
Cast: Alana Hawley Purvis, Joe Perry, Chad Brownlee, Nicole de Boer
When her parents are killed in a sudden car accident, television actor Frankie King returns to her hometown in rural Alberta to face this tragedy after being estranged from her family for 20 years. As she struggles to reconnect with her truculent brother Grayson, old wounds are reopened, and family secrets uncovered.

About the Canadian Film Fest
The Canadian Film Fest (CFF) is a non-profit organization that is dedicated to supporting Canadian independent films and cultivating emerging and established filmmaking talent. Film-loving audiences come to enjoy a diverse selection of 100% Canadian film screenings (features & shorts) and filmmakers flock to the CFF's various industry events to take advantage of essential networking opportunities. CFF's mission is to celebrate the art of cinematic storytelling by showcasing Canadian films and filmmakers.